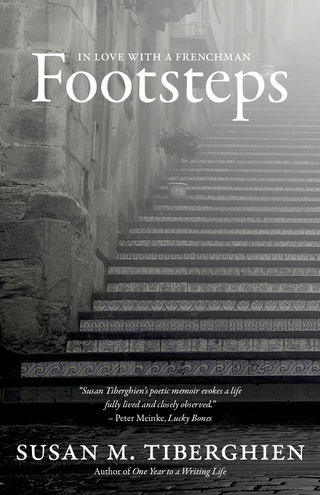 Footsteps, In Love with a Frenchman

Steps, from "Footsteps, In Love with a Frenchman"

There is a dream I kept alive. I was building a bridge across the ocean. The bridge curved, went up and down. There were sidewalk cafés and inns with window boxes of red gernaiums. Terraces reached out over the swelling waves. I was walking to Europe.


There are steps swayhing bck and forth. I sway with them. Old steps, new steps. Steps walking in the snow. I see them in the dark. Steps going up and down. I hear them echo in the stairwell. Steps of children, each one different. I let them go.

Susan Tiberghien is an American-born writer living in Geneva, Switzerland. She holds a BA in Literature and Philosophy (Phi Beta Kappa) and did graduate work at the Université de Grenoble and the CG Jung Institute of Zurich.

She has published three memoirs, "Looking for Gold, One Year in Jungian Analysis" (Daimon Verlag, 1997, "Circling to the Center, A Woman’s Encounter with Silent Prayer" (Paulist Press, 2001), "One Year to a Writing Life" (Da Capo Press, 2007) and most recently, "Side by Side, Writing Your Love Story" and "Footsteps, In Love with a Frenchman" (both Red Lotus Studio Press, 2015) along with numerous narrative essays in journals and anthologies on both sides of the Atlantic.

Ms Tiberghien teaches and lectures at graduate programs, at C.G. Jung Centers, and at writers’ conferences both in the States and in Europe. She has taught at the International Women's Writing Guild Summer Conference at Skidmore since 1990 and does workshops for the IWWG annually, especially in the Northeast. During the last ten years, she has given workshops each spring at the Hudson Valley Writers' Center and the Bethesda Writers' Center. More recently at Grub Street Boston and the Muse and the Marketplace.

She founded the Geneva Writers' Group in 1993 which she continues to dirrect and where she teaches monthly workshops. The GWG brings together 230 English language writers for workshops, readings, salons, and networking. She is the founding editor of their literary review, "Offshoots, Writing from Geneva". Since 1998 she directs the biennial Geneva Writers' Conference with over 200 writers from around the world.

In Paris, she has taught at the Paris Writers Workshop, given workshops at Shakespeare and Company, Village Voice and the American Library. She has also given workshops in Brussels, Luxembourg, Basel, and Bern.

She is a founding member of the International Writers' Residence at the Château de Lavigny, where each summer thirty writers from around the world are welcomed for three week sessions. Please visit the site, www.chateaudelavigny.ch

She is married, with six grown children -- and fifteen wonderful grandchildren. Husband and children are also wonderful!

Footsteps, In Love with a Frenchman
Tiberghien weaves together essays, poems, photographs and family recipes to write a love story that bridges the ocean.
"A poetic memoir evoking a life fully lived and closely observed" Peter Meinke

Side by Side, Writing Your Love Story

A memoir of a 60 year love affair and almost that many years marriage, where the author relates and relives especially the good moments, encouraging the reader to do the same.

One Year to a Writing Life, Twelve Lessons to Deepen Every Writer's Art and craft
An innovative portable workshop to give readers a solid foundation for their writing careers and to lead them to a writing life.

Looking for Gold, A Year in Jungian Analysis
Relates an experience that belongs to everyone – of tapping the depths of the unconscious.
Circling to the Center, One Woman’s Encounter with Silent Prayer
A spiritual memoir and an introduction to the way of silent prayer.

A Baroque Sunset, In Memory of Amy Clampitt
Ode to the Potato
Swaying